We all know that we cannot imagine a life without movies. Movies have become such an integral part of our lives. Movies not only entertain us but also inspire us, make us laugh, cry, give us a new perspective to look at things and so on. And let’s be honest, we always learn something new from each and every movie we watch. Even if it is just a new fashion trend. From the smallest ideas to huge lessons of life, movies make sure of everything. Read our blog about Best Movies of 2020 on SonyLIV.

What happens when the husband of one’s extra-marital affair knocks on the door to confront? Yes! That’s exactly what happened with Sunil. Waiting for his guests for the party, there is a knock on the door. Home alone Sunil gets shocked when he sees Raaghav on the door. Sunil gets into an argument with Raaghav, his love affair Chhaya’s husband.

In the heat of the moment, a mishap takes place and Raghav is shot dead. On the other hand, guests start to arrive. How will Sunil hide the body? Or how will he host the party with a dead body? What will he tell his wife? How will he save himself from the murder case? Well, you can get the answers to such questions only when you watch this movie. Keep reading for Best Movies of 2020 on SonyLIV.

Kadakh was released in June 2020 by SonyLIV. However, this movie premiered at the South Asian International Film Festival (SAIFF) in 2019. This is one of the best Hindi movies of 2020 on SonyLIV which is waiting for you to get thrilled. This thriller movie stars Ranvir Shorey as Sunil, Mansi Multani as Maalti (Sunil’s Wife), Palomi Ghosh as Chhaya and Chandrchoor Rai as Raaghav. Apart from them, the movie also stars Rajat Kapoor, Kalki Koechlin, Shruti Seth, Tara Sharma and Cyrus Sahukar among others.

Bhonsle – Best Movies of 2020 on SonyLIV

Bhonsle is an emotional Hindi drama movie. The movie focuses on the life of Bhonsle who is a retired police officer. He leads a life in a chawl full of migrant residents. However, the movie shows a political twist where a homeless taxi driver Vilas, connected to a political party, is against the migrants and looks down on them.

A sibling-duo shifts as next-door neighbour to Bhonsle. But, Bhonsle hardly interacts with them. Soon, when Bhonsle’s fading health turns out to be a brain tumour, the sibling-duo stands beside him to take care of his health. This leads to a birth of special bond between them. However, how can Vilas not make it any harder for the migrants. Therefore, he pulls the siblings down, kidnaps the sister and rapes her. Bhonsle takes a stance.

Find out how this story unfolds and what are the consequences. Above all, wrong deeds have adverse reverberations. This is a best movie to watch, streaming on SonyLIV after its release in June 2020. In addition, you wouldn’t want to miss Manoj Bajpayee as Ganpath Bhonsle along with Santosh Juvekar as Vilas, Ipshita Chakraborty Singh as Sita and Virat Vaibhav as Lalu; the sibling duo. This must watch Hindi movie premiered at the Busan International Film Festival (BIFF) in 2018.

Ram Singh Charlie is a movie that will make you laugh and cry, both at the same time. One of the best Hindi movies which you cannot afford to skip. The plot deals with the life of a circus artist and his family. This movie is a package of mixed emotions, especially happiness and sorrow. Witness the life of circus artists along with their struggle. Above all, the struggle of such artists who gapple to to take hold of their life after the circus is shut. Here are the Best Movies of 2020 on SonyLIV.

This one of the best movies of 2020 on SonyLIV made its way with its super talented star cast, for you to screen through SonyLIV in August 2020. Meet Kumud Mishra, Divya Dutta, Akarsh Khurana, Saanand Verma, and Farrukh Seyer. Stream into your SonyLIV now and watch this fine work of Nitin Kakkar as the director.

Are you ready to scream and get thrilled with this horror drama? Well, make sure to check the locks of your doors and windows before you indulge in this horror movie. Afterall, who will get scary thoughts and goosebumps while watching this one. Isn’t it? Okay, we are kidding. But Welcome Home is one of the best horror movies of all time.

Get ready to visit a secluded house with two women, the government teachers. A house full of deep perverted secrets of the family living there. As they Welcome you Home. These teachers visit this house full of strange unexplainable occurrences because of a census report. Get to know the real story of this home via SonyLIV.

This Hindi movie was released on SonyLiv in November 2020. With a rating of IMDb 7.5, it became one of the best movies of 2020 on SonyLIV with one of the best IMDb movies. The star cast includes Tina Bhatiya, Kashmira Irani, Shashi Bhushan and Boloram Das as leads. And also, Paresh Rawal, Swaroop Rawal and Akshita Arora are in supporting roles.

One of the best Hollywood movies which will give you an unforgettable thrilling experience. Check out how a corporate lawyer files a case against a leading chemical company DuPont. Robert Bilott, the lawyer takes a stand with an environmental lawsuit on the company claiming it is responsible for several unexplained deaths of animals. These are the Best Movies of 2020 on SonyLIV.

During his investigation he lands up on an unregulated chemical that might be responsible for the unexplained deaths and environmental disbalance in the city. He exposes a long, deep rooted history of pollution with chemicals dumped at the site and so the name “Dark Waters”. Dark Waters was theatrically released worldwide in 2019. However, SonyLIV brought it exclusively for you since September 2020. Grab the opportunity to be a part of this investigation with Mark Ruffalo playing Robert Bilott.

In addition, this is certainly in the list of best movies of 2020 on SonyLIV with an IMDb rating of 7.6. And with the fine star cast including Anne Hathaway, Tim Robbins, Bill Pullman, Mare Winningham, William Jackson Harper, Louisa Krause, Elizabeth Marvel, Victor Garber and Bill Camp.  Also, the movie is based on a popular controversy that got many coverages like an article in New York Times Magazine in 2016.

An American biographical drama that can prove for itself, the reason to be one of the best Hollywood movies. Set in the 1960s, this movie is inspired by a real-life story. It is the story of a working-class Italian-American bouncer who serves the African American classical and jazz pianist Don Shirley as his driver and bodyguard. The duo goes on a trip to explore Deep South, South America.

Originally, Green Book was launched at the Toronto International Film Festival (TIFF) on September 11, 2018. And banged the People’s Choice Award(PCA). On the other hand, it was nominated for as well as won several awards including Producers Guild of America Award (DGA), Golden Globe Award (GGA). Above all, this best movie to watch won Oscars for Best Picture, Best Original Screenplay and Ali won Best Supporting Actor.

The movie got its origin from interviews and letters of Shirley and his father. The leading roles were played by Mahershala Ali as Dr. Don Shirley and Viggo Mortensen as Tony Lip. Now tell us, how can this movie be missed from the list of best movies of 2020 on SonyLIV.

As the name suggests, the movie is a war film based on the year of 1917 of World War 1. April 6th, 1917, the date of aerial reconnaissance and a withdrawal to the new Hindenburg Line. The movie is based on the two young British soldiers appointed to deliver a message to save 1600 men to be a part of a trap of an offensive attack. Continue reading Best Movies of 2020 on SonyLIV.

The plot is influenced by stories of the director & producer Sam Mendes’ grandfather, Alfred Mendes who served during World War 1. This one of the best English movies was premiered in the UK and later released in the US in December 2019. The leading roles in 1917 are played by George MacKay and Dean-Charles Chapman. With its release on SonyLIV in July 2020, this movie is part of the best movies of 2020 on SonyLIV.

In addition, it has won many awards like 92nd Academy Awards, 77th Golden Globe Awards, 73rd BAFTA Film Awards, PGA Awards and so on. 1917 was also one of the top ten films of 2019 chosen by both the National Board of Review and the American Film Institute.

All the dog lovers? You got to watch this masterpiece. An emotional comedy drama which you will absolutely love. A Dog’s Journey is one of the best movies of 2020, a directorial debut of Gail Mancuso which was released in 2019. The movie follows the life of Bailey, a St. Bernard & Australian Shepherd mix. How he lives his life. And also, how this cheerful boy explores an adventure through the lives of humans he gets along with, to find meaning of his existence.

Josh Gad has given the voice to Bailey and stars Dennis Quaid as Ethan; Bailey’s owner. It also stars Marg Helgenberger, Betty Gilpin, Kathryn Prescott and Henry Lau. The movie has a prequel named A Dog’s Purpose (2017) and is based on a 2012 book by W. Bruce Cameron with the same name. Here is our blog on Best Movies of 2020 on SonyLIV.

We got you covered for the list of Best Movies of 2020 on SonyLIV. Don’t waste your time now, go watch these blockbusters before 2020 ends. And tell us in the comment section below if we missed out any movie.

And hey! Do not forget to grab your favourite snacks & drinks to eat and binge.

We will be back with more such blogs to help you, soon. So, Stay Tuned!

Till then, Enjoy Watching! 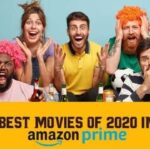